"The history of Textile du Maine is one of highly qualified professionals. Without these talented and determined women and men, we would not have been able to grow through the various challenges that the textile market has met through the years. The skills of these craftsmen and technicians are ever-present. Their values and their loyalty are the foundation upon which Textile du Maine rests." – Sylvie Chailloux, founder 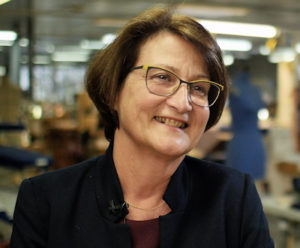 For Sylvie Chailloux, founder and co-director of Textile du Maine, everything began in 1984. Trained as an accountant, she did not appear destined for the world of fashion! It was serendipity when she ended up working in the administrative services of a clothing manufacturer (which no longer exists), and it opened the road to a new adventure. Her fascination for garment manufacturing was born in this workshop, where, in the evenings, she “played with pieces of fabric” and was intrigued by the creation of beauty. This was the seed that led to the creation of Textile du Maine.

Against all odds, the company was created with seven pioneers. At the time, its great specialty was working with cut-and-sewn jersey, still one of its specialties today. In fact, producing stretch clothing was their first bold move. At a time when elastane was new and unknown by most manufacturers, who did not fathom how to work with it, Slyvie Chailloux and her team chose to face the challenge head on. Textile du Maine was born out of this will to defy challenges, under the belief that “everything is possible.” The company has continued to grow organically over the years, adapting itself to changing market needs, and developing new skills, with offerings which included lingerie, corsetry and swimwear.

A Manufacturer of Fine Garments

For Textile du Maine, the production of high-quality clothing had become a passion, a goal, an ideal, and had to be kept alive! Thanks to the company’s experience and will to find technical solutions to even the most arduous of problems, Sylvie Chailloux was able to lead Textile du Maine into the world of high-end women’s garment manufacturing, where it has become a workshop of reference. The most prestigious fashion houses have learned to depend on TXM’s highly qualified team of experts.

Sylvie Chailloux has extended her passion for high-quality creation beyond Textile du Maine itself, as she has sought to preserve, protect and transmit the traditions of French quality and expertise. With great determination, she has sought to maintain and develop a virtuous network of mutual aid to spread and protect the value of Made in France. Today, she is carrying this torch through her role as President since 2015 of Mode Grand Ouest, an association of high-quality clothing manufacturers in Western France, a bastion of traditional garment-making.

Nicolas Tréhard co-directs Textile du Maine with his mother Sylvie Chailloux. After a university education in industrial logistics and management, he worked in positions related to statistics and sourcing.

Nicolas joined Textile du Maine in 2008. While he had been familiar with the world of fashion manufacturing, which he had grown up in, he went through several positions within the company, first in accounting, then within the workshop and in quality control. Believing firmly in the core values of the company, he has turned quite naturally towards collaborative management, and sees company culture as essential.

Passionate about information technology, he has worked constantly to modernize the workshop and its management tools.

Like his mother, Nicolas Tréhard is driven by beauty, by quality, by craftsmanship, and by a belief that “everything is possible.” It is with pride that he co-directs Textile du Maine today.